Home » Early Childhood Development » 100 percent of French 3 year olds in pre-K. Only 51 percent in the US. Almost none in New Hampshire.

100 percent of French 3 year olds in pre-K. Only 51 percent in the US. Almost none in New Hampshire. 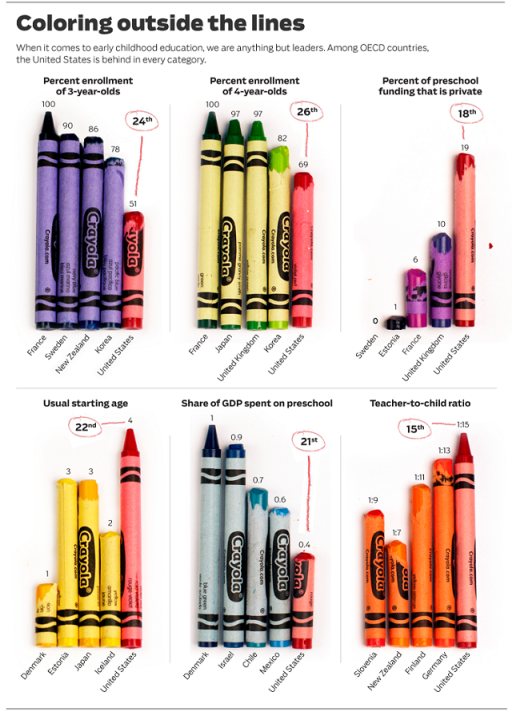 President Obama’s allies at the Center for American Progress are pumping his early childhood initiative.  And they should.  We do a good job in the U.S> educating well-off kids, but most poor kids start behind in school and never catch up.  The countries that out-educate us do it by, among other things, starting early.  In New Hampshire, we’re not in the game yet.  Along with Mississippi and a few other states, we have not yet begun to consider state support for preK, a better way than vouchers to reach low income children.

The United States is lagging far behind much of the developed world when it comes to enrolling children in preschool programs, ranking 24th and 26th among Organisation for Economic Cooperation and Development (OECD) countries in the enrollment and three- and four-year-olds, respectively.

By Bill in Early Childhood Development, International Comparison on May 6, 2013.
← What are the real lessons from international comparisons of education systems? Louisiana Supreme Court rules voucher funding violates the state Constitution | The Times Picayune →