Michael Marder is physics prof at the University of Texas at Austin, and Co-Director of UTeach (“We prepare teachers.  They change the world.”).  He’s a scientist who has found communicative ways to visualize his research data.  Sometimes he applies that skill to education issues to see what’s really going on.  Here is his look at the role unions play in student achievement (taken from page 8, here).

The view that unions are an obstacle to educational progress is the almost universally shared premise among education reform proponents in the U.S., whether the proposed reform is punitive teacher evaluations, the charterization of public education or state-funded private school vouchers.  Prof. Marder lets Steve Jobs (2007) serve as the voice of conventional wisdom on this issue:

I believe that what is wrong with our schools in this nation is that they have become unionized in the worst possible way….This unionization
and lifetime employment of K-12 teachers is off-the-charts crazy. 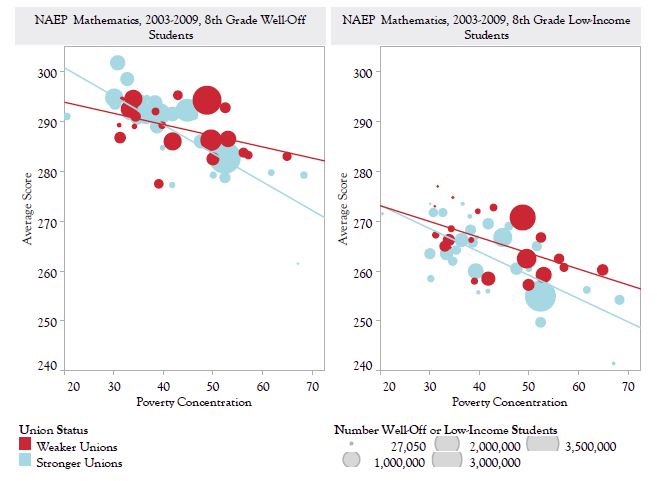 Here’s what Prof. Marder observes in his dispassionate way:

As an additional note, here is an interesting study by the conservative Fordham Institute that ranks the states by the strength of their teachers’ unions.

By ANHPE in Education Reform, Improving Education, International Comparison on May 26, 2013.
← If you believe what NEO says about its role in New Hampshire’s voucher program, you should read this Charters outperform traditional public schools? That’s not what the data shows. →