Home » Bills » Americans for Prosperity going for broke on SB 193, the voucher bill

Americans for Prosperity going for broke on SB 193, the voucher bill

Backers are working overtime to counter the drumbeat of challenging news about SB 193, the bill to encourage parents to withdraw their children from public education.  On December 6th, the Concord Monitor reported on the Reaching Higher NH analysis of the bill under the headline, “Voucher Bill could cost N.H. millions.”  Then yesterday, the Union Leader wrote about home-schoolers rebelling against the bill’s modest accountability provisions as a “backdoor to impose evaluation requirements on home-schoolers.”

So the bill’s highly organized advocates are pulling out all the stops to head off legitimate concerns by the bill’s supporters.  First, Josiah Bartlett Interim Director and New Hampshire State Board of Education chairman Drew Cline issued this rebuttal to the Reaching Higher NH analysis.  Now we have a mailer from the Koch-funded Americans for Prosperity group demonstrating the kind of support House members can expect if they vote for SB 193.

Notice the sunny patina AFP puts on a bill that would begin to replace New Hampshire public schools with uncertified tutors, private schools and home-schooling, a project fully supported by Governor Sununu and the New Hampshire Department of Education. 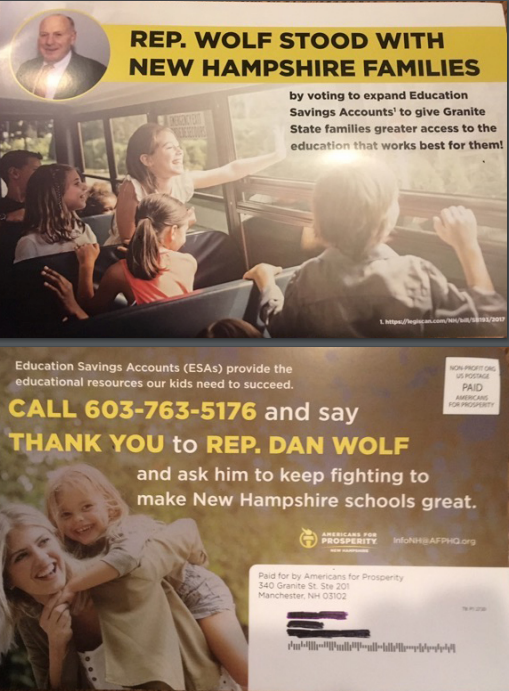