Union Leader Reporter David Solomon captures here, on the last day of the Union Leader series on the Common Core, what you see in classrooms all over New Hampshire.  Be sure to read the whole thing.

AMHERST ­— Brenda McHugh was in the middle of a math lesson with her first-grade class at Wilkins Elementary when mathematics coach Jen Eccleston entered the room with Nicole Heimarck, director of curriculum and professional development for SAU 39, the district that serves elementary schools in Amherst and Mont Vernon as well as Souhegan Regional High School.

As McHugh paused to introduce her guests, including a reporter, one girl leapt to her feet and turned to face the visitors: “I solved a tricky question today, Mrs. Eccleston,” she said. “Our brains are on fire.”

There was a lot of talk about brain power in McHugh’s class that morning and obvious enthusiasm among the 15 first-graders. They gathered in a semi-circle at her feet as she took them through several exercises designed to reveal concepts behind addition, subtraction, equations and even what Heimarck described as “algebraic thinking.”

McHugh hung an orange rod on one side of the scale with 10 blocks. On the other side, she hung a green rod with six blocks and a purple rod with four blocks.

“Because it balances,” the class replies in unison.

“So many kids have their brains on fire,” says our precocious greeter.

see the rest at ‘Brains are on fire’ in Amherst. 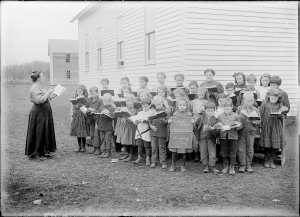 Debbie Villiard, a fourth grade teacher passionately dedicated to the kids at Manchester’s Northwest Elementary School, has had great success with the new standards in her classroom.

Here’s what she told me a couple of weeks ago:

How big a change are the new standards?

Common Core standards don’t limit what I do in the classroom – they open doors.  I can use interesting topics from articles or chapter books and dig deeper into literature with the students.  I can teach them to look at the text, see who the source is and see if they believe it. That’s what the standard says.

What I’m teaching hasn’t changed drastically.  But we go deeper and spend more time on skills.  We don’t just teach something and move on.  In math, for instance, we do lots of different activities having to do with place value.  I try to make sure that not only can they do a paper and pencil task but, maybe, a task with place value blocks or a word problem or game that involves, say, adding five ten-thousandths to this number.  I try to make sure they really, really own those skills.

We do have teachers’ guides that help with questions on such things as identifying the themes, the skills and the vocabulary.  It’s all right there for the teacher.  But I don’t use those worksheets.

I’m looking for, “What are the things in the new standards that I need to use from that teachers’ guide?” – like identifying the theme, for example.  Say the theme in a given book is “friendship.”  I might draw from the questions in the teacher guide that deal with friendship but leave out the questions that say, “Describe a time when you had a friend”

We just have to pick the parts of existing materials resources that best fit the standards so we don’t have to start from scratch.

END_OF_DOCUMENT_TOKEN_TO_BE_REPLACED

Jane Ellwood teaches second grade at Manchester’s Northwest Elementary School, where Principal Shelly Larochelle has been leading a savvy and effective rollout of the new state standards.  Here’s how Ms. Ellwood described her experience to me: END_OF_DOCUMENT_TOKEN_TO_BE_REPLACED

Robin Galeaz is a committed and highly effective 7th grade math teacher at Manchester’s McLaughlin middle school.  She has made great strides in implementing the new standards in her classroom and helping other teachers do the same.  Here is what she told the Manchester Board of City Schools last night:

Mayor Gatsas and Board of School Committee members, Good Evening.  My name is Robin Galeaz and I teach 7th grade math at McLaughlin Middle School.

When the State of NH adopted these new College and Career Ready Standards, they were strengthening the GLEs/GSEs that already existed.  Standards were added, while others were moved from one grade to another grade to allow for a more focused approach, but no standards were discarded. By adopting these new standards the state has increased the expectations of students in terms of how they apply their knowledge and show mastery.

END_OF_DOCUMENT_TOKEN_TO_BE_REPLACED

A teacher’s plea for leadership from the Manchester school board – Selma Naccach-Hoff, English teacher and head of the English department, Manchester High School Central

Here are excerpts (the highlights are mine) from a message sent to the Manchester Board of City Schools by Selma Nacach-Hoff, long-term Manchester educator and now head of the English department at Manchester High School Central:

….We’re done with NECAPs in English and Math. We know that there’s some kind of standardized assessment that will take its place.  Our students and our teachers will be held responsible. We want to be able to give our teachers the tools to help them move students in the direction that will help these students succeed in whatever they choose to do.  But we are floundering.  Where do we go? What do we do?

On the high school level, students are assessed based on mastery of competencies. In English (as in all other disciplines) our competencies are rigorous. They’ve always been aligned to state and national standards.  Quite frankly, these competencies are basically the same as the new standards….One shift that we do see is a shift towards more informational text, both in writing and reading.  And we’re already trying to address that.  Another is a greater emphasis on technology, and our district has a comprehensive plan to address that as well.

END_OF_DOCUMENT_TOKEN_TO_BE_REPLACED

According to our teachers, the Common Core Standards are already a success in New Hampshire

September 19, 2013 3:09 pm / 8 Comments on According to our teachers, the Common Core Standards are already a success in New Hampshire

Legislators and school boards are hearing from advocates wanting to roll back the new Common Core State Standards. Fortunately, while this political push has been building, New Hampshire educators have been gaining experience with the new standards.  And among educators who have actually implemented the standards, there appears to be almost universal support.  Here is some of what they say:

Asked how it feels to be moving toward Common Core standards,  Angela Manning said,

It’s overwhelming, of course, because it’s a big shift” she said matter-of-factly.  ”It’s been interesting, though, to watch the kids step up to the level of deeper thinking that we’re asking them to do.  We’ve done persuasive writing in the past but this is the first time it’s been research based.

In this particular project, we started with debating, on two different teams.  After that it just progressed.  I didn’t have to say, ‘Now let’s do a research-based writing project.’  The kids said, ‘Let’s research something,’ and decided on ‘Do fast food restaurants cause obesity?’  They’re writing this essay together as teams.  The next one they’ll do alone.

….Our teachers are saying, “Ok. This is a standard that we have to teach and we’re going to make it applicable to our students so it’s meaningful. How can we make it best for kids’ learning? The bigger things that are coming out of Common Core are that the thinking required will benefit these kids.

END_OF_DOCUMENT_TOKEN_TO_BE_REPLACED

The Portsmouth Herald had a good balanced discussion of the Common Core standards yesterday.  Here are some highlights, with the quotes from teachers bolded.  It’s worth reading the whole thing.

Mary Lyons, assistant superintendent of SAU 50, the district covering Rye, Greenland, Newington and New Castle, said any criticism of the Common Core she has seen from the public is due a lack of understanding or the spread of misinformation. Teachers will still have the autonomy to be creative when it comes to running their classrooms and won’t be constrained by the standards, she said.

“It’s not like it’s a new idea to be responsible for standards,” she said.

Even so, some educators are concerned about the standards’ emphasis on reading informational and non-fiction texts. According to Common Core proponents, the thought is that since college and career readiness overwhelmingly focuses on complex texts outside of literature, the standards also ensure students are being prepared to read, write and research beyond literary works.

END_OF_DOCUMENT_TOKEN_TO_BE_REPLACED

May 18, 2013 9:45 am / 4 Comments on Portsmouth’s New Franklin Elementary School gets results by eliminating the distractions and concentrating on learning

I’m with George Shea, New Franklin’s principal since 2005, and we have just dropped into a classroom where a half dozen 4th graders are sitting at a low table with their teacher, learning that if you multiply a number by a fraction, the resulting number is smaller.  Back in the hallway, we steer around Jeremy and his reading specialist sitting against the wall with a book of historical fiction in which Jeremy’s copy has yellow stickies in every direction to indicate words he didn’t know or anything else important, like key points in the story or his thoughts about what was coming next.

We pass a 5th grade boy going with his teacher to toss a ball for five minutes. Then one of the smaller kids is purposefully carrying out his assignment to lug this heavy backpack down to Ms. Roberts at the other end of the hall.  They’re both on  “motor breaks,” and then return ready to sit down and concentrate again. 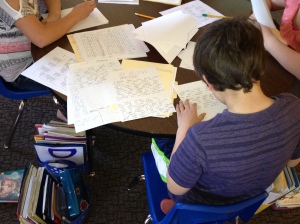 Writing about the Revolutionary War

We drop in on a classroom filled with 5th graders on computers writing “persuasive” essays about the Revolutionary War. The teacher checks in over their shoulders commenting and helping them sharpen their conclusions.

Then two teachers appear, each with an arm under one of a little boy’s shoulders.  They are holding Peter, a kindergartener, just off the ground as they walk calmly but quickly down the hall.  He’s calm too.  George, the principal, is concerned but says that a dozen of his teachers are trained in what’s called “Therapeutic Crisis Intervention,” a method of de-escalating and heading off behavioral issues before they get out of hand.  It gets to this level maybe several times each school year.  Half an hour later when we walk by his classroom, Peter is reading happily on the floor with his teacher and a classmate.

New Franklin is a “Title I school,” meaning that it gets extra federal support to reach children at risk of failing.  About 36% of New Franklin students are qualified for the federal free and reduced lunch program.  In years past, New Franklin’s scores in state-wide tests did indeed reflect the challenges faced by the low income neighborhoods they serve. But recently, the improvements have been dramatic.

The accomplishments of New Franklin and many New Hampshire public schools are taking place in the midst of an acrimonious national debate about the future of American public education.  Broadly stated, proponents of “education reform” say something like this: